I don’t know about you, but I’m really sick and tired of Netflix subscribers whining about there not being anything to watch. If that’s your opinion, then you simply have been looking in the wrong places. So instead of wasting your time with 13 Reasons Why, mix things up with one of my ten Netflix picks for May, 2017.

The Absolute Must-See:  The Shining

I know, I know, who hasn’t seen The Shining? Believe it or not, a lot of people. If you are one of those people, shame on you. I mean, come on. It’s The Shining! It’s the best horror film ever made! And I mean that sincerely. If you haven’t seen this legendary film yet, just watch it already. You won’t be disappointed. Stanley Kubrick meticulously crafted this masterpiece with the aid of Jack Nicholson’s unbelievable acting prowess. If you’ve yet to see it, you have to watch it. And if you haven’t seen it in like twenty years, watch it again. It’s that good.

I cannot begin to describe how much I love Amelie. It’s no secret that I love foreign films. The Italian film La Vita E Bella is constantly in competition for my favorite film ever, and Amelie really isn’t that far behind it. I honestly think it’s one of the best films ever made. Amelie is the story of an impish french girl who brings joy to the lives of everyone around her. It’s a movie that will never, ever fail to put a smile on your face. It will enchant you with that indescribable spirit that only foreign films seem to be able to tackle. It’s the unmistakable delight at life substantiated with an indescribable tinge of sadness. Together this concoction will add together to leave you, the viewer, with an inexplicable feeling of frisson at every scene. The first time I watched this film I found myself repeatedly checking the time. Not because it was dragging on, but because I never wanted it to end. That is not praise that I can give many films. So why didn’t I elect this one as the movie for everyone? This is a French film, and like most french films, it tackles certain subject manner in a way that might seem unnatural for some of our more prudish western sensibilities. It’s never especially lude or inappropriate, but it is rated-R, so it might not be perfect for the more conservative viewer. Yep, that’s right. It’s Wet Hot American Summer. Haven’t seen it? You’re missing out. Wet Hot American Summer is an absolutely nuts comedy from the early two thousands that will probably leave you in stitches. Or it might not. If you are not a fan of comedy of the absurd in the vein of Airplane, then you probably won’t find this one to be that entertaining. But if you find yourself laughing out loud at the absurdity of it all, you have to see this one. Plus, jsut listen to this cast: Janeane Garofolo, David Hyde Pierce, Michael Showalter, Paul Rudd, Molly Shannon, Michael Ian Black, Elizabeth Banks, Bradley Cooper, and Amy Poehler.

The Movie For Everyone: Sing Street

Okay, okay. I promise this will be the last time I’ll mention this film. Actually, you know what? I won’t promise that. I LOVE this movie, and I believe that everyone alive should watch it. This movie deserves to be a classic in the same vein as Back To The Future. That’s a big statement, but I mean it with the utmost sincerity. I won’t talk too much about it here, as I wrote a full review last year, but really quickly this is a film about some Irish kids that start a band and you will absolutely love it. I promise. Just watch it. No seriously, just watch it. 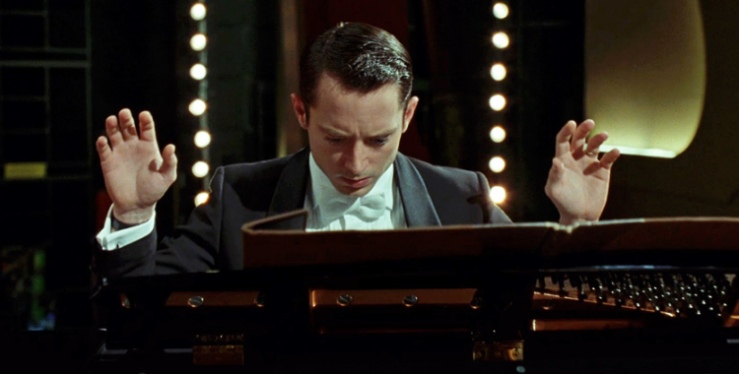 Sometimes you just have to watch a movie purely based-off the originality of its premise. Grand Piano is one of those films. Here’s the logline: The best pianist in the world gets the shock of his life at his solo concert when he receives a note declaring if he misses a note he will be shot.” Intrigued? You should be. This isn’t one of the best films ever made, per se, but it is still really entertaining and definitely worth a watch. The music is beautiful, Elijah Wood continues to break out of his mold with an adept performance, and the script was penned by Damien Chazelle. Remember Damien Chazelle? He wrote and directed Whiplash and La La Land, two of the best films of the 21st Century? Yeah, that’s him. An added bonus is that unlike most thrillers which are full of gritty violence, obligatory sex. and dark depressing themes, this film is rated PG-13, thus making it a perfect watch for the whole family.

The Invitation will mess you up. No really, it will take your brain, strangle it, and put it back inside your head. I don’t want to tell you much about this film, because I think it’s best if you go in as blind as I did. On the most basic level, it’s a film about a dinner party in which something more nefarious is afoot. I won’t tell you anything more. I will tell you this, the movie takes a minute or two to get going. You probably will be a little confused with why I suggested it at first, but trust me, when it hits, it hits.

We have had an unbelievable horror resurgence in recent years. With the rise of independent horror films like Get Out, The Guest, or last year’s The Witch, the horror genre finds itself in the best place it’s really ever been in. This trend though, would not be possible without 2014’s The Babadook. This is an incredible film. It’s from an australian female director who crafted this Hitchcockian, intimate film which is not only an unsettling instance of psychological horror, but also a really fascinating character study on the effects of grief. If you are a horror fan, a fan of well-crafted stories, or someone who looks to support female directors, you owe it to yourself to check out this cult phenomenon.

Hugo. Oh Hugo, Hugo, Hugo. There are few films as devisive as this one. There are people, like myself, who view this as a beautiful and heartfel film about children in Paris. There are other people who think this movie is boring. Those people are wrong. No, no, I shouldn’t say that, it’s important to be understanding of other people’s opinions, and, to be honest, I can see where they’re coming from. This is not a flashy film. It takes its time to craft a really imaginative story and it’s possible that some of you will not be impressed by this movie. But, for those of you with a higher appreciation of film, this movie will enchant you to the same degree that it did me. Plus, it’s directed by Martin Scorcese, so that should be everything that you need.

A popular refrain amongst storytellers is that comedy and tragedy are two sides of the same coin. There is no film that I can think of where this is more readily apparent than Don’t Think Twice. Don’t Think Twice is a film about improv comedians who deal with some really serious life blows, but they’re still funny. It genuinely is a movie that will make you laugh and will make you cry. It’s directed by stand-up comedian Mike Birbiglia, who also made the incredibly interesting film, Sleepwalk With Me (Also on Netflix, also recommended), and stars a series of talented comedic B-Players, including none other than Keegan Michael Key. That’s his elbow in the picture above, I promise he’s in the movie.

The Weird One: I Don’t Feel At Home In This World Anymore

This movie is nuts. No really, it’s just absolutely crazy. I Don’t Feel At Home In This World Anymore was a standout debut at Sundance this year, that’s right, this year; it’s only a couple months old and it’s already available for you to stream. Netflix snatched it up for a few million dollars because they saw something there. What they saw was a very interesting character piece about an average woman who is just absolutely fed up with the world. Out of her disenchantment comes a tendency towards crime which gets her roped up in a series of outlandish and violent scenarios. This movie is a really interesting watch if you’ve got the time. It’s very well directed, has notes of comedy and drama all wrapped up with an ennui-shaded bow, and, once again, has a great performance by Elijah Wood in a role you’ve never really seen him in before.

One thought on “Navigating Netflix: May 2017”