There are lots of movies that I really enjoy. There are plenty of films that I exit the theater saying, “that was a really good time at the movies.” But there is one type of film that is much rarer. Those are films that don’t just fill you with joy while you’re watching them but inspire you to be proud of cinema as a whole. Baby Driver is that film. 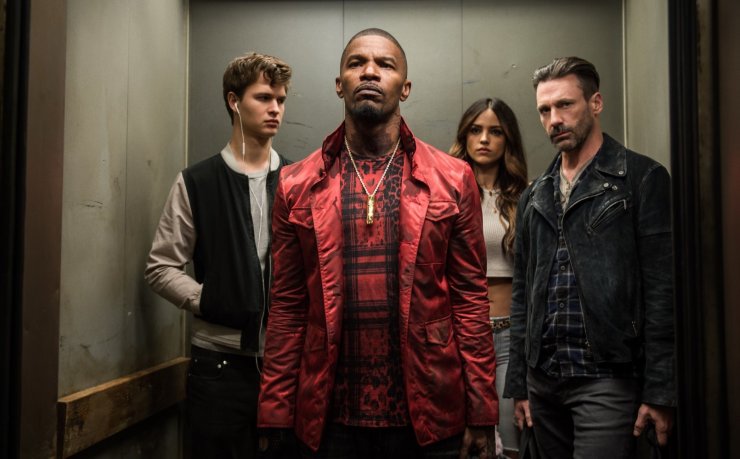 Baby Driver is directed by the incredibly visionary Edgar Wright. Wright, for those of you who don’t know, directed Shaun of the Dead, Hot Fuzz, The World’s End, and Scott Pilgrim Vs. The World. These are some of my favorite films ever, so when I heard that this movie was coming out, it understandably skyrocketed to become my most anticipated movie of the year.  And believe me, I was not let down. This is an interesting project from Edgar Wright, as it’s arguably the first time he’s made a “normal” movie, for lack of a better word. All of his previous films, while certainly accessible, have been infused with his idiosyncratic style to the point that Edgar Wright movies could be deemed a genre all of their own. I’m not saying that Wright doesn’t bring a certain amount of style to this movie, but he does so in a way that doesn’t overpower the story he’s telling. That story being the tale of a getaway driver named Baby (Ansel Elgort) who is forced into a world of crime by Kevin Spacey, when all he really wants is to be with his girlfriend Deborah, played by Lily James.

The relationship between Baby and Deborah was fantastic. Their chemistry radiated off the screen and enchanted the hearts of everyone in the audience. In all honesty, though, every character in this movie was perfectly fleshed out and served their role in the story symbiotically. It was so refreshing to watch a movie with actual characters again. Most films that come out these days have semblances of a character without actually creating anyone believable or memorable. The writing in this film was out of this world. This movie is simultaneously funny, heartfelt, romantic, action-packed, nefarious, and thrilling without feeling like it’s trying to be too many things at once. It flows from scene to scene like a finely composed opera, rather than an action flick. The soundtrack this film was imbued with served the story in the best way possible. It was never intrusive, but always elevated whatever scene it was occupying. There were also signs of Wright’s obsessive attention to detail in the scenes without music where you could hear a distinct but faint ringing that was meant to replicate Baby’s tinnitus.

The action sequences in this movie are tremendous, just tremendous. And yet, here’s the interesting thing about them. They feel immensely fresh. How many times have we seen car chases or bank heists in movies? Don’t answer that question, it was meant to be rhetorical. But anyway, this is just a testament to Edgar Wright’s directorial abilities that he managed to make something so familiar feel so revolutionary. The really fantastic part of it is, the entire movie was made to feel that way. I don’t know how to fully describe it, but this movie feels simultaneously timeless and classic while still being revolutionary and excitingly new. It is a triumph of filmmaking. What Baby Driver accomplishes is both a film that enchants you from the beginning, but also rekindles your passion for cinema as an artform. It is simply sensational and is a movie that everyone should see. If you are a fan of Die Hard and Mission Impossible, go see this movie. If you saw Scott Pilgrim Vs The World and you thought, “wow this is weird but I kind of like it,” go see this movie. If you just think Ansel Elgort is kind of cute, go see this movie. It deserves to be the movie of the summer and almost demands it. I want to see it do very well at the box office so that way we can get more incredibly original and monumentally entertaining movies like it. Baby Driver is my jam.

All images are from Baby Driver, by Sony Pictures

One thought on “Baby Driver”