Honestly, it’s gotten to a point where it’s kind of absurd how many good movies we’ve got this year. It seems like every week I go to the theater and walk out with a massive smile on my face. With all of that being said, I would like to make sure that this movie doesn’t get downplayed with all the other successes of the year. Because let me make one thing clear: The Big Sick is nothing short of a tour de force.

Films like The Big Sick are one in a million. It’s the type of movie that comes out and galvanizes the entire film community for years to come. Movies that define a generation of young hipsters with their revolutionary storytelling capabilities and defiantly different perceptions of self. I would say that The Big Sick is easily the most revolutionary romance since (500) Days of Summer. However, I’m not sure I can call it a romance. In fact, I’m not sure I can call it anything. It’s comedic, dramatic, and romantic, but it’s neither a comedy, nor a drama, nor a romance. This story of a Pakistani man falling back in love with his ex-girlfriend after she enters into a coma is such a richly unique and beautiful composition that it is difficult to find a flaw with it. One of its greatest strengths is its ability to perfectly master tone. It’s easy when you make a romance involving illness to be either overly morose or ostentatiously affected and sensationalized, but The Big Sick doesn’t resort to any of that. It feels remarkably human and intimate and real while still having that indescribable cinematic quality that separates the good movies from the greats. I think if there’s one decidedly human quality that I can arbitrarily assign this film it would be humility. It is a drop dead triumph of a film but it treats itself and you like it is just like any other. When in reality it is very quietly breaking new ground and achieving a level of genius that few others even come close to approaching. 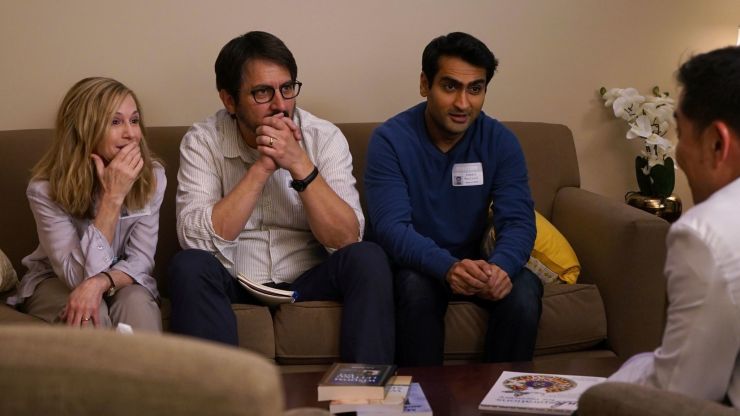 If there was an Oscar for casting, this movie could have won it. Every role in this movie was masterfully handpicked so that it could have just been someone with a camera following a bunch of real people around for a few weeks. Each of these actors had me captivated with each passing scene. Kumail Nanjani gave an incredibly honest performance, as did Holly Hunter and Ray Romano. Ray Romano! The guy was a revelation! Zoe Kazan is a hidden gem that needs more praise than she gets. She really impressed me in how she managed to remove herself from her other indie romance roles so that I didn’t just see her character from Ruby Sparks and What If fall asleep for two hours. The only actor who felt like a weak link was Aidy Bryant. She didn’t feel nearly as genuine as the rest of the cast, rather feeling more like she was trying greatly to be a movie actor but just falling short. Maybe if it was a different movie she wouldn’t have stuck out so much, but unfortunately, she just didn’t fit with this one.

You could pay the top filmmakers alive a billion dollars and have them work for five years on the same script and they still couldn’t come up with something a version of this film that is as good as the one we received. The reason being just how personal this project was. Every iota of this film feels perfectly realized. Characters use modern technology and apps without feeling pandering or obnoxious. Everything, from the clothes to the cars to the sets feels just perfect. The cinematography is invisibly brilliant as it uses the subtlest of techniques to create the most up-close and personal of a film as possible without feeling intrusive or unnatural. The movie is structured miraculously as well, as with each passing scene following the first act I found myself more and more blown away by the brilliance of each scenario. This movie has more heart than any other movie this year combined. The relationship dynamics are like works of art, and when this movie is finished, every storyline is fulfilled in the best possible way. The Big Sick had me on my knees. It’s an incredible movie that really will change the way films are made. I can’t wait to see what the young filmmakers it will no doubt influence will produce. Until then, I’ll be content with buying it on Blu-Ray and watching it many more times to come.

All images are from The Big Sick, an Amazon Studios Production