Alright. You don’t want spoilers, I don’t want spoilers. And I’m going to try my best not to go too in depth into anything in this review, but I will have to explore the plot a little bit in order to fully critique this film. If you’re more of a casual moviegoer, you will probably be alright reading this. But, if you’re as serious about going in blind as I am, you should read this after you see the film. So go see it, and then come back. Now, let’s talk about Star Wars: The Last Jedi.

Never before have I been more apprehensive about a big budget film than I was for Star Wars 8. Because, I’ll be honest with you, I’ve got Star Wars fatigue. Rogue One wasn’t bad, but it lacked the imagination of the rest of the franchise and, over the past few months, has left me feeling the same disenchantment that I feel when I see movies like Jurassic World or Fantastic Beasts, which is to say, like I’ve been played. Thankfully though, when I left the theater yesterday, all those fears were eliminated. I’ve thought about this a lot since I’ve seen it, and while I’m not fully ready to call it the best Star Wars movie just yet, I feel fully confident declaring it the best film of the lot of them. What writer/director Rian Johnson did with this film is wholly unlike anything we’ve ever seen before. He somehow managed to make a movie that includes all the zany fun spirit of the original trilogy, the imaginative scope of the prequels, and the modern thrillride factor of The Force Awakens, and yet still feel new, and fresh and unlike any of its predecessors. His script is certainly the best of any of them, and explores genuinely interesting territory, bringing characters we know to places you’d never expect, all the while making some really interesting commentary on the motivations of people, and religion, and almost reflecting in on the very nature and relevancy of the saga itself. I was absolutely floored with every direction this movie took. Well, nearly every direction. 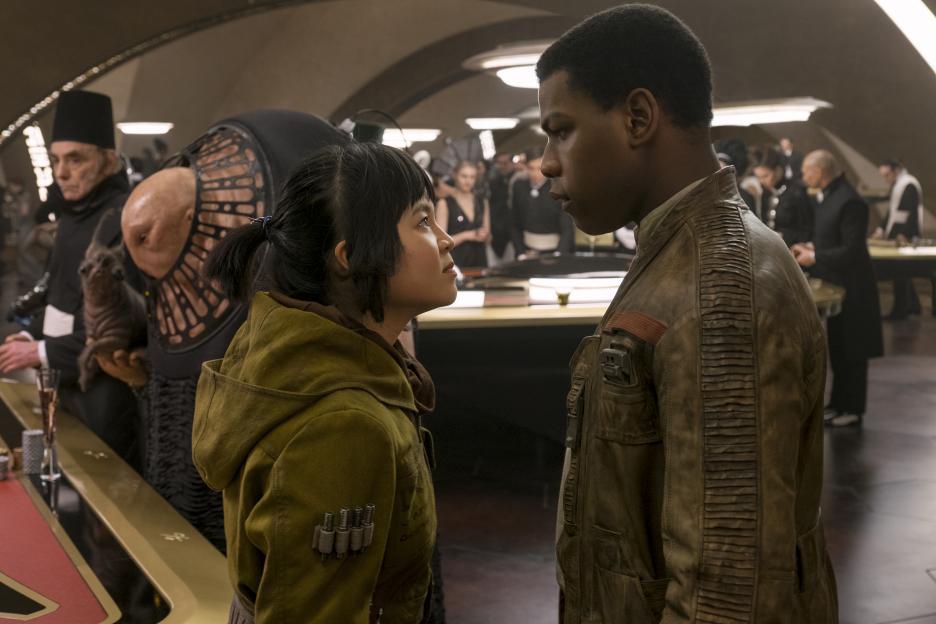 I’ll just go ahead and say it, rather than finding a way to factor it in gracefully, as I’m just itching to let it out. I thought the whole bit where they go to the casino planet was just dumb. The plot, which was typically ferociously well-paced and dynamic, screeched to a halt every time they cut back to that section of the movie. I felt that Kelly Marie Tran’s character Rose was honestly just annoying. She was awkwardly introduced and remained awkward throughout the runtime. I think part of the issue was that Tran just isn’t as good of an actress as the rest of the absolutely stellar cast, but also that her whole thing just didn’t mesh well with the rest of the film. I liked Benicio Del Toro, for all his strangeness, in fact, I thought he was a much better Forrest Whitaker than Forrest Whitaker was in Rogue One, but ultimately I felt that entire fifteen minutes on that planet could have been cut straight out of the movie. Alright. That was really my single complaint with the movie, and in the end, when I buy it on Bluray, I can just skip over that bit. Now, back to the stuff I loved.

What makes this movie really special is the fact that the main story is relatively smaller in comparison to the other films. There are no planets threatening to be blown up here, or galactic plots on the line, but instead its just one fleet of ships trying to destroy another fleet of ships for two and a half hours, and it could not be more riveting. Oddly enough, this film feels more weighty and dramatic than any of the others, despite it being scaled back considerably. Everything in Star Wars the Last Jedi just feels so immense and it is all thanks to Rian Johnson. He crafted storylines for these characters that were incredibly layered and special causing us to really care about literally every single thing that happened. Every time something bad would go wrong in this movie, you genuinely felt like the rebellion was over. It was like every ten minutes I’d say, “Well this is it, this is the end.” The fact that he could make me feel that in Star Wars Episode Eight is very, very impressive.

The acting is at a record height this time around. Mark Hamill gives a performance worthy of a career peak. The nuances found in Luke Skywalker are a long, long way away from the days of A New Hope. Daisy Ridley maintains her token naivete from the seventh film, without coming out too cheeky. Oscar Isaac is literally the coolest man on earth and really lets that loose here, as Poe Dameron is actually given a character this time around, with like an arc. Domhnall Gleeson just oozes off the screen as the classic movie bad guy and really, really made me smile in his every scene. Even Carrie Fisher, who I thought was the weakest link of The Force Awakens, is bringing her A-Game. And then you have Adam Driver as Kylo Ren. Okay, I’m going to say this now and it may bring some frustration to you diehard fans out there, but I think Kylo Ren is the best character in all eight films. The raw intensity that he brings to the table in this film is incredible, and he brings Rian Johnson’s writing to life in an energetic and beautifully nuanced way.

Look, man, the more I think about this movie the more it brings a smile to my face. I really, really loved it. There were several moments in this movie that had me literally gasping out loud for how much I was inspired by what I was witnessing. The scenes on Luke’s Island were just so miraculous, and the exchanges between Rey and Kylo Ren were beyond exquisite. The fight choreography manages to be groundbreaking and high octane without feeling too dancey like it did in the prequels. John Williams’ score adds this otherworldly volume to the film that does nothing short of elevate it to another plane. And as if masterful directing, intricate writing, veteran acting, songlike editing, and truly transcendent composing weren’t enough, cinematographer Steve Yedlin shot this movie with an eye that hasn’t been found in Star Wars previously but has been sorely missing. Star Wars: The Last Jedi is the most innovative Star Wars movie yet, taking the franchise in a direction it’s never seen before. What else is there to say? I really, really loved this movie.

All images are from Star Wars: The Last Jedi, a LucasFilm production.