There aren’t many times in my life that I’ve wished to be a twelve-year-old girl. But, my screening of Pitch Perfect 3 was one of those times. You see, while the rest of the theater giggled and clapped, I sat there in silence, not really hating the film, but not enjoying my time with it either. I decided that the solution would be to make a deal with the devil to trade lives with one of the girls in that theater for two hours so that I might enjoy the film a little bit more. Unfortunately, the devil was not available, so I did not enjoy the movie. 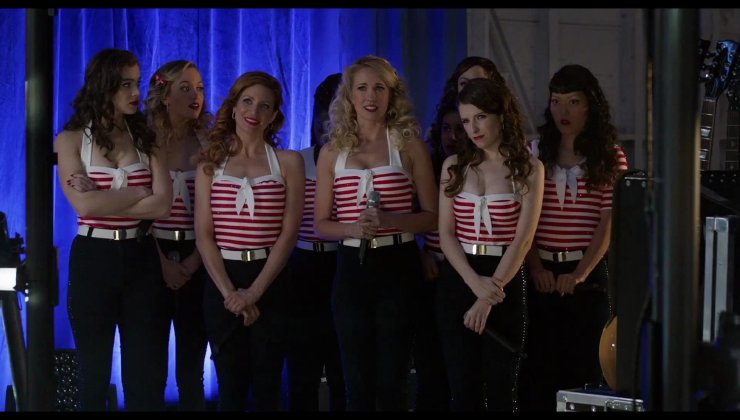 The story this time around, is that the Bellas, an intrepid college a capella group have graduated college, and have decided to go about their daily lives. They are now too old to sing, as the new young and attractive Barden Bellas have taken the reigns, and they are left to fade away into obscurity. It’s really sad to see a group of such old, talentless, ugly women onscreen. Every day the line between Anna Kendrick and Cloris Leachman grows more and more blurred. And Anna Camp? She’s practically geriatric. Anyways, as if that storyline weren’t already unbelievable, the group decides the only way for them to sing again is to go on a USO tour, which also, for some reason, is a singing competition. Not to mention they shoehorn in a ridiculously bad subplot in which Rebel Wilson is pursued by her estranged father, who is also a megalomaniacal Bond villain played by John Lithgow, proving once and for all that Fat Amy is truly the Tow Mater of this franchise. Before you read any further, know that at some point in the film, Fat Amy fights a bad guy by using a group of sausage links as nunchucks. So yeah, that’s about where we’re at.

This movie isn’t terrible, it just kind of falls flat. A vast majority of the jokes are just dumb, and there are multiple moments where they try to bring back old bits from the previous films and it just doesn’t work. DJ Khaled is in this film because of course he is, and really just adds to the overall feeling of this just being an opportunity for a movie studio to sell popular music to young girls in a package that is inoffensive and will sell catchy T-shirts at Hot Topic. At the end of the day, this isn’t really a bad thing, the hordes of preteen girls in my theater really seemed to enjoy the movie, and if it appeals to the target audience, more power to them. But I’m not the target audience, and it did not appeal to me. I think the best word for this movie isn’t bad, so much as it is embarrassing. I was embarrassed for the people in this movie. I’m a big fan of both Anna Kendrick and Hailee Steinfeld, I think they’re both terrific actresses, but this movie just makes them look foolish.  And man, the screenplay is just laughable at parts.

There were bits of the movie that I liked. A few jokes landed and for the most part, John Michael Higgins and Elizabeth Banks continue to bring much-needed life to this series. The music is cute and generally works when its implemented. The cinematography is surprisingly decent for a lazily made comedy and the editing is genuinely very good. During the slower scenes, I entertained myself by trying to spot the two members of the a capella team that don’t have defined character traits. It was actually really impressive the way the camera literally never focused on them. Ultimately, if you are, for whatever reason, a fan of the franchise, you will probably like this film well enough, even if you concede that it is the worst of the three. As for the rest of you, probably save your money.

All images are from Pitch Perfect 3, a film by Universal Pictures