It’s probably best if you watch the movie before you read this review. I will do my best to keep the spoilers to a minimum, I won’t mention anything you shouldn’t have gleaned from the trailers. But, still, just go watch the movie. You were going to anyway. At the very end of this review, I will have a paragraph about the ending of the movie. So needless to say, heavy spoilers will be implemented at that point.

Avengers: Infinity War. The conclusion to ten years of work. The culmination of 19 carefully manufactured films. The ending we’ve all been waiting for. Except it’s not actually this. At all. Because there’s still an Avengers 4 that comes out next year. Not to mention an entire slate of Marvel films that are scheduled to be released going forward. So what is Avengers: Infinity War then? It is an overly long masturbatory commercial for a movie that doesn’t even have a title yet. Kind of how Captain America Civil War was a commercial for this movie. And Avengers 2 was a commercial for it. Nothing about this movie feels interesting in any way. It’s just a collection of scenes in which characters you’ve been forced into liking meet other characters you already know to engage in some terribly directed action scenes. A computer could easily have written this movie because it follows a painfully apparent pattern. X Character is hanging out doing their thing when all of a sudden BAM! Trouble strikes. Through some convoluted, lazy plot point they meet up with Y Character whom they have never met. They exchange witty banter. There is a lot of posturing. Someone makes a reference to a popular cartoon or movie. They fight a mini-boss and someone gets either injured or taken. Thus creates the catalyst for them to run into the next group of characters. Copy. Paste. Repeat. And it goes on for two and a half hours like some sort of Sisyphean nightmare.

Usually, when you write a movie review you are expected to discuss the performances of all of the actors in the movie. In the case of Avengers: Infinity War, this becomes somewhat tortuous. It seems as though everyone who has ever been in a movie is in this film. Just to make things easier for the both of us, I will go ahead and list the cast in order of billing and will only stop when I reach someone who is not intended to actually affect the plot. Robert Downey Jr., Chris Hemsworth, Mark Ruffalo, Chris Evans, Scarlett Johansson, Don Cheadle, Benedict Cumberbatch, Tom Holland, Chadwick Boseman, Zoe Saldana, Karen Gillan, Tom Hiddleston, Paul Bettany, Elizabeth Olsen, Anthony Mackie, Sebastian Stan, Idris Elba, Danai Gurira, Peter Dinklage, Benedict Wong, Pom Klementieff, Dave Bautista, Vin Diesel, Bradley Cooper, Gweneth Paltrow, Benicio Del Toro, Josh Brolin, Chris Pratt, William Hurt, Letitia Wright, Carrie Coon, Winston Duke, Ross Marquand, Samuel L. Jackson, Cobie Smulders, and Stan Lee. Do you get the point? you might have noticed two very significant omissions from this list. First of all, Paul Rudd as Antboy was not in this film, although literally who possibly could care, but most importantly, Jeremy Renner as Hawkeye is nowhere to be seen. This really disappointed me, as the scenes with Hawkeye’s family in Ultron are the only scenes in any of these big Avengers movies (excluding all of the standalone properties) that have any kind of genuine emotional weight. If you are sitting there, reading that list of names, and wondering to yourself, how is it possible to juggle that many characters and still make a coherent film? The short answer? It’s not. You see, literally 80% of these characters are virtually inconsequential to the rest of the film. They’re just there because they have to be. I mean, did we really need Don Cheadle as the Iron Patriot in this film? No. Of course not. But he’s there. What baffled me most is a major premise of the plot revolves around Vision, as played by Paul Bettany, and Scarlett Witch, Elizabeth Olsen, two of the least-developed characters who only exist in the least interesting films in this franchise. Most of the actors in this movie aren’t really acting, they’re just kind of going off muscle memory at this point. It’s not like Anthony Mackie really had to put much thought into how he was going to deliver his four snappy lines in the movie. I will give credit where credit was due though. I thought Zoe Saldana as Gamora was really trying to bring some emotion to a very barren film, and Chris Hemsworth, while his storyline probably could have been cut down to about a tenth of what screentime it actually occupied, did some very good work in this film.

I don’t want it to be communicated that I hate all Marvel films. Because that simply isn’t the case. While I am very vocal about my fatigue with the superhero genre as a whole, I am also the first one to express my excitement when they release something fresh. In fact, the last four films Marvel has released I legitimately enjoyed. Guardians 2, Spider-man Homecoming, Thor Ragnarok, and Black Panther all breathed new life into a studio that had really stagnated with the release of the unbelievably boring Captain America Civil War and the world’s most unforgettable film: Doctor Strange. So what is it that those movies had going for them that Avengers: Infinity War does not? They have genuine style. They have directors who were genuinely passionate about what they were doing. They had focused stories and served a purpose beyond simply to make as much money as possible. Avengers: Infinity War is so far from a movie that it is actually kind of laughable. Every scene, every line of a dialogue, every frame of computer-generated noise, was perfectly calculated to be as marketable as possible. It is infected with this desire to remind you of all the other movies you loved and to hype you up for what’s left to come, so much so that it forgets to tell an actual story.

The first half was at least watchable but by the last relentless stretch of the movie, we had been left with the Avengers, once again fighting a faceless army with zero stakes in one of the worst directed sequences Marvel has ever put to screen. Joe and Anthony Russo are a cancer to the modern action film. We have finally started to move away from the quick cut, ugly mess of blockbuster filmmaking, films like John Wick, Atomic Blonde, and even bigger names like Black Panther have been committed to going back to basics, allowing us to actually see what is happening onscreen, rather than allowing the computer to do all the work. But the Russo brothers came in and destroyed all the hope we had recently developed. The action sequences in this movie are terrible. They are cut to shreds and the images composed in the frame are seemingly unintelligible. Every big shot is so fast and so poorly framed that is impossible to tell what is going on. There were multiple times during this film that I had to stop, look at the screen, and think to myself, everything that I am looking at was created on a computer. Nothing about this is real. And that is genuinely sad. 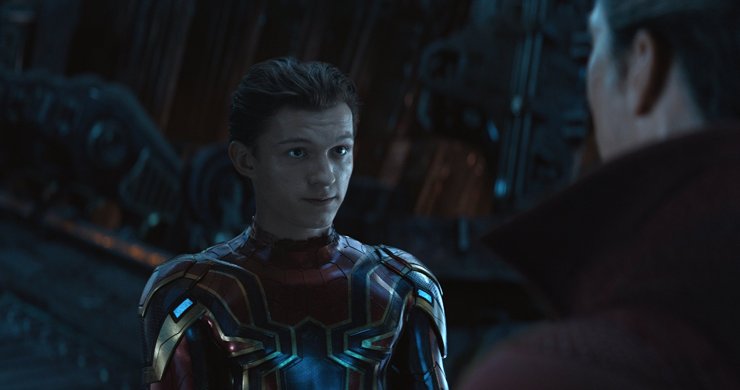 Look man, this movie could have been worse. It’s true. But to some degree, it’s almost worse that it’s not aggressively bad. It is so corporatized, so manufactured, so inconsequential, that it genuinely does not feel like a film. They tricked you into dedicating three hours of your day into watching this banal mediocrity only to get you just hooked enough that you have to come back and do it again next year. It is a literal waste of time.

I’m going to give my score now and then at the bottom will be my thought’s on the film’s ending.

Avengers: Infinity War gets a

Are you sure you saw the movie?

Guardians of the Galaxy Volume 3 has already been announced. It’s slated to come out in 2020. Spider-man Homecoming 2 literally comes out next summer. And after Black Panther made 1.3 billion dollars at the box office, we will probably get like twelve sequels. In other words, what are we even doing here? The ending to this movie just made me angry. As each of these characters crumbled away into Voldemort ash, I just got more and more frustrated. It’s such a cheap way to end the movie. None of these deaths mean anything. None of them. It’s just a method for them to leave you with some modicum of shock so you come back and watch the fourth film. There were people in the theater weeping for Mantis. FOR MANTIS. I mean, Jesus Christ, stop. Nothing was more annoying than that ending. It’s just such a “Come back for Part 2” kind of a copout. Sorry. I know a lot of people loved this movie. I just left feeling mad.

All images are from Avengers: Infinity War, a film by Marvel Studios

One thought on “Avengers: Infinity War”